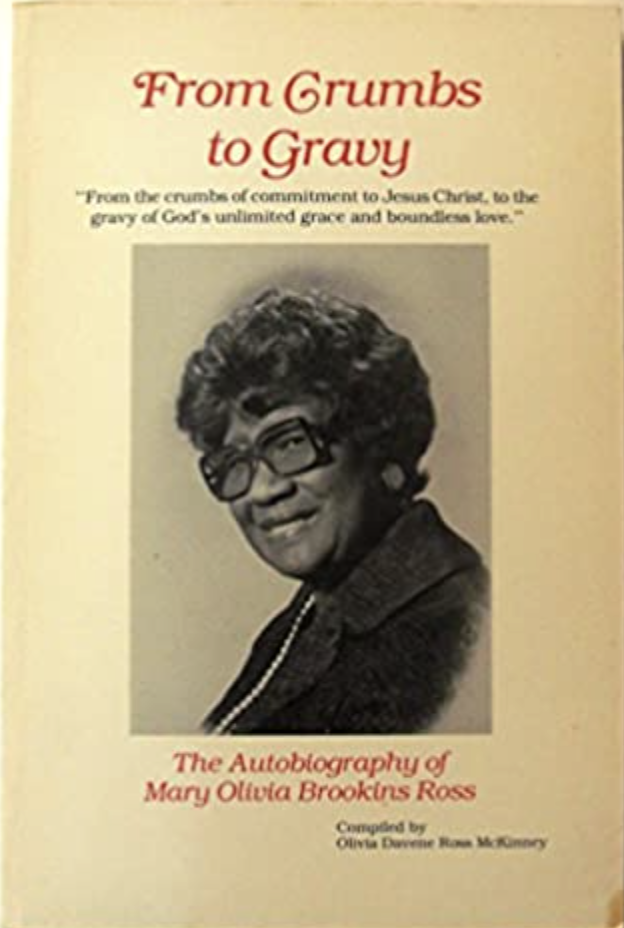 From Crumbs to Gravy: The Autobiography of Mary Olivia Brookins Ross

Mary Olivia Brookins Ross was an educator and devout Baptist who led the women’s branch of the National Baptist Convention for more than thirty years.

Mary Olivia Brookins Ross was an educator and devout Baptist who led the women’s branch of the National Baptist Convention, the nation’s oldest and largest African American religious convention, for more than 30 years. In this short autobiography, her faith shines through as she recounts her childhood in Georgia and how she came to lead the Women’s Auxiliary, as well as the lives of her extended family.

Born in rural Georgia, Ross spent her childhood in poverty, helping her family by working in the cotton fields during the summers. Her account of her childhood is full of loving descriptions of her extended family, particularly her grandparents who had been born slaves, and small moments of joy such as sharing a single stick of gum with her siblings.

After high school, she attended Spellman Seminary in Atlanta, the first time she remembers encountering the “stigma of color” among African Americans. She married one of her former teachers in 1930, and moved with him to Detroit, where he was pastor of Greater Shiloh Missionary Baptist Church. Initially unprepared for the differences between her rural childhood and life in a massive, industrialized city, she threw herself into her husband’s church and the larger Baptist convention programs that connected congregations across the nation.

Eventually she was elected President of the Women’s Auxiliary to the National Baptist Convention in 1961. Under her leadership, it not only revived from near bankruptcy, but thrived as she organized conventions, outreach, and even hospital construction in Africa. In addition to her own life, Ross details the lives of her children and extended family, with nearly a quarter of the book devoted to genealogical records. She also includes a number of speeches that she either delivered or that greatly shaped her life upon hearing them.