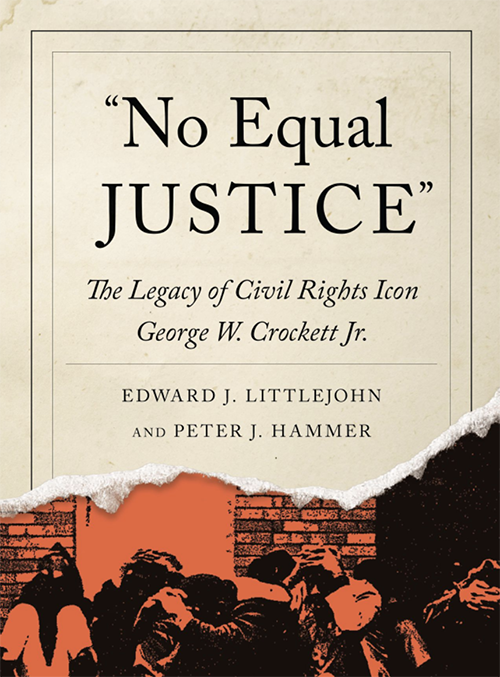 George W. Crockett Jr. was a distinguished attorney, accomplished jurist, and Congressman who dedicated his life to the struggle for civil rights for African Americans and for all those unjustly targeted by the law.

George William Crockett Jr. was a distinguished attorney, accomplished jurist, and Congressman who dedicated his life to the struggle for civil rights for African Americans and for all those unjustly targeted by the law. In this highly readable biography, authors Edward Littlejohn and Peter Hammer draw heavily on Crockett’s own words to tell his remarkable life story.

Born in Florida in 1909, Crockett’s carpenter father instilled in his son a lifetime love of woodworking, but it was his experiences with segregation that gave Crockett his passion for justice. After graduating from Morehouse College, he enrolled in the University of Michigan’s Law School after discovering tuition was only $150 a year. When he graduated in 1934, he was the only Black student in his class.

In 1937, he helped found the nation’s first racially integrated bar association, the National Lawyers Guild, and in 1939 became the Department of Labor’s first Black lawyer. After several years with the United Auto Workers, he co-founded the country’s first racially integrated law firm in 1946. Two years later, Crockett was one of the defense lawyers in the most infamous case of mid-century America: the trial of eleven Communist Party leaders accused of conspiring to overthrow the federal government. With the “Red Scare” at its height, the defendants lost, and their lawyers were thrown into jail for contempt of court.

It was while defending himself against disbarment before the Michigan Bar Association that Crockett defined both his identity and his core principles: “I am first and foremost a lawyer proud of his profession, second, a Negro deeply conscious of the wrongs done his people; and third, an unrelenting champion of the civil liberties of all people.” Crockett carried these views into his work organizing lawyers for defending Civil Rights workers in the South and then as a judge in Detroit when he clashed repeatedly with the city’s racist police department. After retiring from the bench in 1978, he was elected to Congress in 1980 and spent the next decade continuing to crusade for racial and economic justice, both within the U.S. and around the world.